Chocolate and coffee will never be refused :D

Wow what a day!! Croatia and England played an amazing, exciting, and physical game. Through all Croatia won out!!! Congratulations Croatia!! You made it to the final the first time in your team history!!! Sorry to see England go but there can only be one!!!

So now onto the final and third place games….I think the final will be an intense and amazing game. One team has won the final and one has never been this far. I am going to be watching it…hope you all will be too!!

Well today and tomorrow are rest days for the players that are still in the Cup. It truly has been an amazing few days. To all the players there are both still playing and have been sent home you have been amazing, fantastic, beautiful, and powerful. You all have and are achieving the dream!! Congratulations to those that are still playing…you have just a few more games before you are done. THERE CAN ONLY BE ONE!! Who will it be?

So far there has been amazing games played. Some went into extended time and penalty kicks. And some just finished out at the last possible moment. They were all great!! I love watching them all!!! I’ve been fortunate this year. Most of the games, especially the ones I really wanted to see were played on my local FOX network. I was so tickled when I found out that was the plan. The next one will be as well from what I understand. I can’t wait 🙂

The Teams that came out of the Knockouts (round of 16) and are moving on are as follows:

If keeping up with the Brackets for the Quarter-finals here it is: 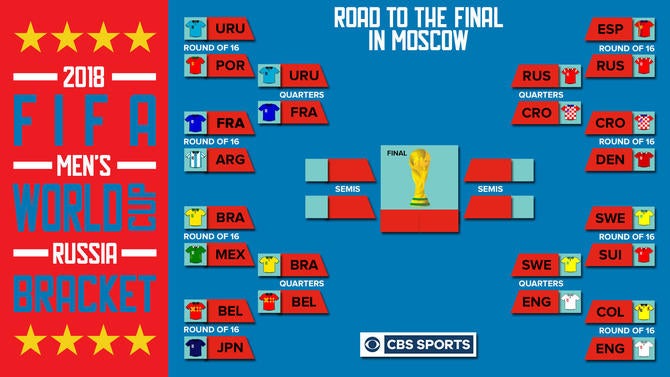 Game times are as follows:

FRIDAY:
France vs. Uruguay at Nizhny Novgorod, 10 am ET on FS1
Brazil vs. Belgium at Kazan, 2 pm ET on FS1

Whoohoo!! We made it to the knockout stage better known as the Round of sixteen. Today is a rest day for everyone but after that it starts to get serious. There are a lot of teams that were not expected to come this far…but they did!! Congratulations to all the teams that have made it this far…it has been an amazing set of games. The excitement is just beginning. THERE CAN ONLY BE ONE!!!

This is the brackets the way the teams will play each other:

And if anyone is interested in the schedule for The Round of 16:

Round of 16 schedule (all times Eastern)

Croatia vs. Denmark in Nizhny-Novgorod, 2 p.m. on FOX (local)

Once every four years all the best soccer teams qualify for an amazing competition!! This World Cup, Russia is doing the honor of hosting the matches. Unfortunately the United States did not make it this time but none the less it has shaped up to be an amazing set up.

I am so excited to see the games or as many as I can get to see. I love to watch the games just for the fun of watching them. Yes I have my favorites but it really goes beyond even just rooting for your favorites. The way the players play, the excitement, the emotional high, and even the let down when the teams you were rooting for don’t make it….I love it all!! I wish every team that has made it to the CUP the best and as much as I wish you all could be there….THERE CAN ONLY BE ONE!!! BEST OF LUCK TO ALL OF YOU

If you want to watch the games:

The opening ceremonies start at 10am est with the first game with Russia vs. Saudi Arabia for the opening match at 11am est. Should be decent match followed Friday with 3 more matches starting 8am est with Egypt vs Uruguay, 11am est Iran vs Morocco, and 2pm est Potugal vs Spain.

To see more info and the schedules for the all the matches go to http://www.FIFA.com  or http://www.GOAL.com

When the green woods laugh with the voice of joy, And the dimpling stream runs laughing by; When the air does laugh with our merry wit, And the green hill laughs with the noise of it.

Thoughts That Dared To Grow With Me

Natascha and the Cats

Being a Mom is a Monumental event!

Adventures of a Busy Mom

Making blessings out of this busy life!

I'm irish, this is my weight loss journey

Art and Lifestyle by Brandon Knoll

The world is best viewed through the ears of a horse.

Finding the Balance Within

I celebrate myself, and sing myself.- Walt Whitman

THE CREATIVE PALACE FOR ARTISTS AND AUTHOR RESOURCES

Book reviews and tidbits on life.

All About Healthy Choices

If you want to be a hero well just follow me

Create More than You Consume

Miles from our home

Somewhere on the road...

My Life: Teaching, Acting and Living with MS

A site dedicated to helping you become stronger across the board; physically, mentally and emotionally.

Digital Marketing for People by People

{ tools to inspire and empower you to live, not just exist }

The daily reads and writes

stories of victories, challenges and endless learning of a mom

I want to be rich. Rich in love, rich in health, rich in laughter, rich in adventure and rich in knowledge. You?

The ultimate guide for independent travellers seeking inspiration, advice and adventures beyond their wildest dreams

Thoughts And Adventures Of A Stay At Home Dad

Where life as a mom, wife, and being me is upside down, backwards, & turned all around.